The Grayling Season by Stuart Minnikin

With just a couple of weeks remaining of the Trout season thoughts are now turning to Grayling and extending my fly fishing into the winter months, possibly, given decent conditions, right through to next year's Trout season. As the days get progressively shorter and temperatures begin to fall natural triggers inside our native Brown Trout turn their attention from feeding to spawning and catches fall away, often overnight, in what is a remarkably well timed close season. 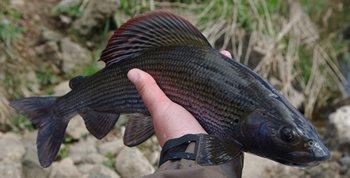 But as sun sets on another passing Brown Trout season and we reflect on all it brought us, a new ‘Grayling season' is just beginning. Though it has been legal to fish for Grayling since mid June they are often a byproduct of our Trout fishing, admittedly quite a welcome one at times, but they are far from their best during the summer months. Post spawning and in warm water Grayling are poor fighters and can take an age to revive before swimming off again. It is probably this that gave rise to their erstwhile poor reputation (particularly on the southern chalk streams) which the Grayling Society have worked hard to change.

With the onset of Autumn and cooler water temperatures Grayling quickly return to peak condition and give a good account of themselves, especially when hooked in fast water when they erect their oversized dorsal fin and a prolonged downstream fight can be expected. Put away your rods for winter and you'll be missing some great fishing for a magnificent fish.

From the first day of October until early November (later in mild years and sooner in cold years) Grayling fishing is usually just a pleasant continuation of the Trout season, where we use the same flies and techniques, fish the same areas of river and can generally expect a hatch or fall of flies. In the faster water towards the pool head we can expect hatches of upwings and caddis and egg-laying stoneflies. Probably the most eagerly awaited and taken fly is the Pale Watery Dun. This small upwing can hatch in good numbers and provides some superb dry fly fishing. A small Pale Watery Paradun and a CDC Upwing, alternated on a fine tippet, are all you'll need as imitations. A Klinkhamer Special can also be very effective in such water as it imitates a wide range of the flies likely to be encountered. Don't rule out the various forms of nymphing and North Country Spiders in the faster, more broken areas of the pools. These techniques can be very effective, hatch or no hatch.

At this time of year there can be huge numbers of Grayling rising on the long, smooth glides. I have often found some of the better fish here too. Fish found here are likely to be taking different flies from those in the fast water. Small midges and terrestrials are the likely suspects and keep an eye open for aphids (Greenfly). With temperatures falling, windy weather and overnight frosts, leaves begin to drop, depositing the diminutive pest onto the water. I find a small F Fly in a variety of colours fished on a fine, degreased tippet, as good as any imitation for fishing slow glides. Any small fly (< #18) should really do the trick, because as the fly gets smaller detail becomes less important. What is important here is drag and to be more precise the dreaded Micro Drag. A dragging fly is easy to spot but micro drag can be very difficult to detect and is probably the biggest cause of not catching on smooth water. Grayling are the most discerning of fish and simply will not tolerate drag, in fact, micro drag seems to put off grayling more than a fly dragging quickly. There are many ways to counteract drag, too many to discuss here, but try aiming the cast higher so it falls onto the water with some slack in the line/leader or change your casting angle.

A friend of mine once recounted that whilst fishing for Grayling in mid-November, as the hatch of Pale Wateries petered out, late in day, light fading, the last one drifted downstream holding a miniature flag with the words "That's All Folks!" and that was it for another year. Clearly an hypothetical story but you can see exactly what he meant. There comes a day every year, usually sometime in November in the north, when you just sense the river is shutting up shop for another year. Flies will hatch virtually every day of the year, but gone now are the hatches that get the fish going. From now on you are going to have to work for your Grayling. Now is the time to put away your tackle for another year unless you are prepared to slog it out searching long and hard for a grayling shoal; don't mind trawling the bottom of the river with heavy nymphs; can accept that frozen body parts is all part of the ‘fun'; as the going gets tough the tough get going and all that...

Grayling are in peak condition through the winter months. They spawn in March and April and must be in good condition for the rigours of spawning. They can only maintain this condition through an ability to feed when temperatures plummet. With no hatches to speak of a grayling in winter must look to the riverbed for food in the form of nymphs, larvae, snails, worms, shrimps, etc. They are perfectly adapted to feed in such away with their underslung mouth (so much so it's a wonder they take surface flies so well!).

If we are to continue to be successful in our pursuit of Grayling we must now change tactics and present our flies very near the bottom of the river, where the Grayling is looking for its next meal. Now is the time to put away the dry fly box and pull out your heavy nymph box. Czech nymphing has been the way to go for many years, but now, with the emergence of French leaders, we have more options, often combining both into each drift. In deeper or faster runs and pools I employ a team of three heavy nymphs fished Czech style, adjusting the weight/size of flies to fish near the bottom. In slower and shallower water I prefer a French leader with two or three flies. French leaders (and fly lines based on the French leader concept) allow us to fish at longer range while still maintaining control and drag free drifts. Nowadays I tend to cast further upstream (but still relatively short range) using a French Leader and Czech nymph leader together, basically attaching my Czech nymph leader to the indicator braid. The rod is lifted, or leader retrieved by hand, to keep in touch with the indicator braid as it drifts back downstream. When it is close enough I then revert to fishing Czech style under the rod tip and letting it swing in below me.

We can only fish in this style with the right rod. Short, crisp, dry fly rods are out of place here and simply won't work. A long rod, rated for light lines, is necessary to cast without the weight of a flyline to provide load. My favourite is the Hardy Jet Sintrix 10' #3, matched to a Hardy Cascapedia Reel for in-hand balance. The beauty of this rod is that not only will it cast French leaders with ease, it also excels with matching flyline for more traditional techniques - the complete year-round rod for every technique.

Fly choice is, perhaps not quite as important here as one might think. More important is the weight of your fly/s. I'd rather fish all day with the ‘wrong' fly in the correct weight than the ‘right' fly which is either too heavy or too light. It needs to be heavy enough the reach the bottom quite quickly, but not too heavy so that it is constantly snagging the bottom. It is actually quite easy to determine whether you have a correctly weighted team of flies...

Czech Nymphs have fallen out of favour somewhat over recent years, probably replaced by tungsten bead nymphs in one form or another. I still place lots of faith in my Czech Nymphs and they still produce, from drab caseless caddis larva imitations to hot spot and bright pink versions. I also carry a selection of tungsten bead nymphs in a variety of weights. My Copperhead Nymph, despite its simplicity, still performs after many years of service. It's been joined in my nymph box by the Duracell, a fairly recent creation from Scotland, which Grayling both sides of the border seem to approve of. The latest trend in Grayling fishing and flies is the use of artificial worms. I've used a very big, bright red worm for many years now. It is unbelievably successful when the river is just fishable after a flood and often accounts for 100% of my fish on such days. However, most of the newer arrivals on the scene sport a flexible, detached body, of one sort or another. The most famous (or infamous) of these is the Squirmy Wormy; used extensively by some, loathed by others, but it's success is beyond doubt, even in low water. I'm not getting into the rights and wrongs here, but suffice to say that you'll find some lurking in my fly box this winter!

Hardy Pro, Stuart Minnikin is a professional fly fishing insructor and APGAI guide based in North Yorkshire. Stuart has fly-fished extensively throughout the UK, from the northern most reaches of Shetland to the beaches of Jersey, the southern chalk streams to the Midlands reservoirs. Find out more about Stuart Minnikin.