The Test, Itchen and Hampshire Avon are the world's most famous fly fishing rivers. Their crystal clear waters flow through the bands of subsurface chalk that run across southern England producing the internationally rare and unique phenomena – the chalkstream.

As the rainwater soaks down slowly through the porous chalk geology under gravity, it is filtered and stored in these aquifers. The water eventually emerges from the aquifers as a spring at the source, feeding the river system with very high quality water of a consistent temperature in both summer and winter. The alkaline water that flows in these chalk stream ecosystems is extremely fertile giving rise to an abundance of weed, invertebrates and of course salmon, trout and grayling. These calcium rich waters allow freshwater shrimps, snails and other creatures to build external skeletons. With over half a dozen species of stonefly, twenty two species of mayfly, and nearly forty species of caddis, it is no wonder that these diverse rivers are justifiably famous to the dry fly fisherman. 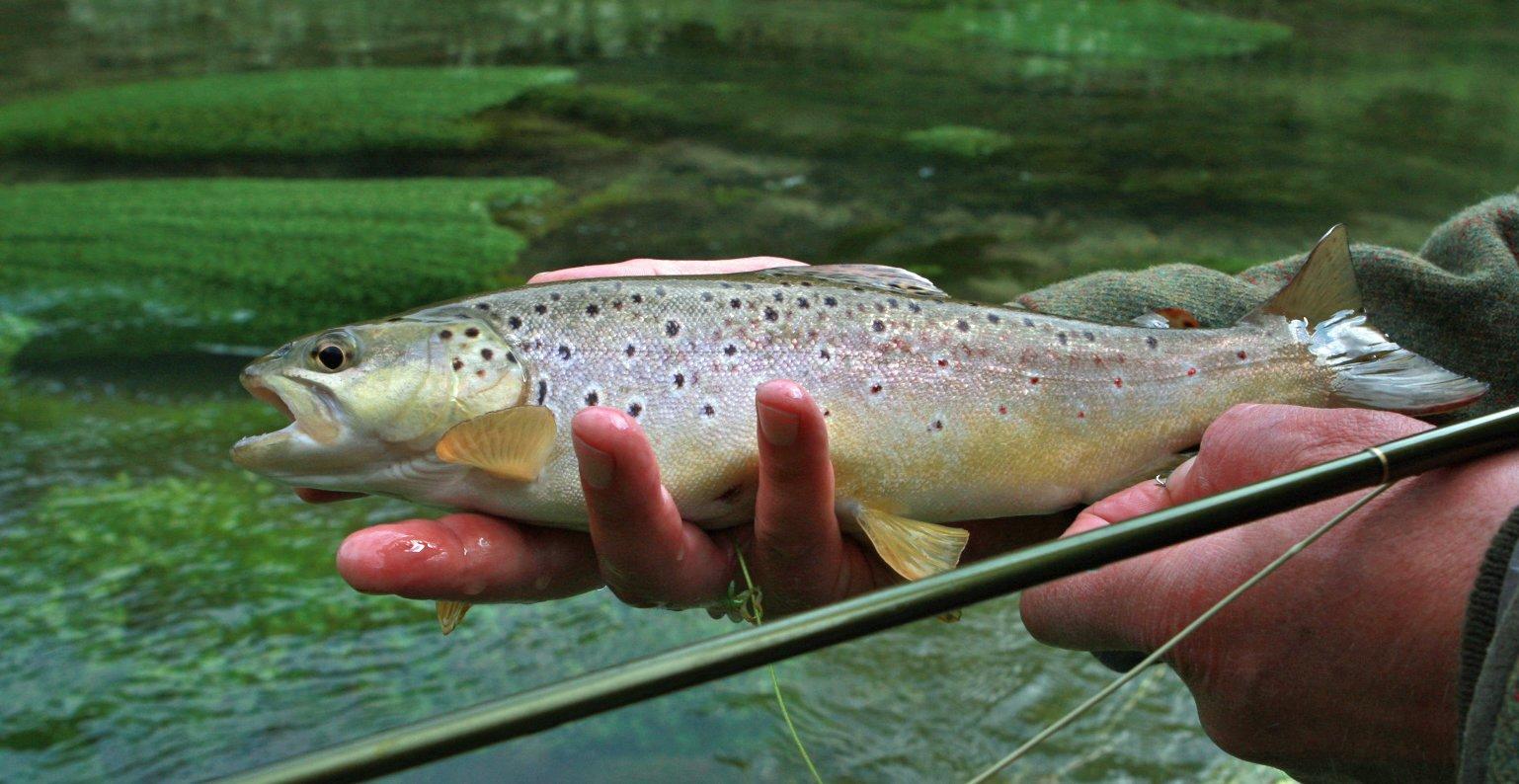 Chalk streams only occur in our British Isles and across the channel in France. Here in southern England these rivers beautifully reflect historic human intervention. The Romans used the rivers to great effect, particularly to power their mills. In later years an intricate system of carriers and millstreams were dug out criss-crossing the floodplain. These redirected water to drive mills and flood farmland and meadows, thus enriching the land and giving early season grazing - the relatively warm water allowed subsurface meadow growth even in the coldest winters and protected growing grass from frost. Most of these backwaters can be seen today away from the main river channels. Know as 'carriers', they actually provide some of the most testing and exciting fishing.

The rivers today are privately owned by various 'riparian' estates and carefully managed by the estate's river keepers. The river keepers maintain the river in optimum condition for fly fishing; cutting weed, mowing banks and boosting the natural fish stocks with stocking programs. Howard and his company Upstream Dry Fly are proud to offer fly fishing on some of the most exclusive estate beats these beautiful chalk streams have to offer.

The majestic river Test has four main tributaries; the Bourne Rivulet, the beautiful Dever (Howard's favourite), the Anton and the Dun. The large Test floodplain drains an area of 1260 square kilometres. She flows in length for just under 40 miles (64km) from her source in the upper chalk at the village of Ashe, through Whitchurch, Longparish, Chilbolton, Longstock, down to Stockbridge, Kings Somborne, Romsey, Testwood and through tidal marsh into the estuary at Southampton Water.

Her water is so pure it was used to wash the paper that makes the Sterling bank notes for the Bank of England at Portals Mill near Overton.

If one adds all the backwaters and carriers, often running parallel to the main river giving the Test her braided appearance, her total length adds to over 86 miles (139km), giving plenty of water on which to practice our most noble of sports - dry fly fishing.

The river Test is the birthplace of this sport in the modern sense; the famous Houghton Club in Stockbridge can date back its records to 1822 and every year thereafter. Great fishers and entomologists such as Halford and Lunn started their work on this great river, particularly in this area. This was the precursor to today's fly fishing techniques – in particular the tying of dry flies and the upstream method of fishing.

The Test is also known for its prolific mayfly hatches - as the name suggests in May (and early June). The mayflies hatch, following two years in their aquatic nymphal stage. The nymphs swim upwards and struggle out of their skins, through the surface film, to emerge as a flying adult - the dun (or sub-imago). If they have been lucky enough to avoid the teeth of hungry trout, they fly to the trees, shed their skin again and the final adult stage of their life cycle is born, the spinner or imago. The mayflies hatch (emerge), mate, lay their eggs and die – all within a day – hence their name – Ephemera danica 'the ephemeral dancer'. Anyone who has witnessed clouds of 'dancing' male spinners in the trees attracting their mates, knows what a sight it is to see the fall of spent mayfly once they have finished their reproductive duties. The trout go into a feeding frenzy, taking full advantage of this nutritious bounty and packing on their body weight after a more frugal winter. The peak two weeks are sometimes known as 'duffers' fortnight' because the fishing can be so easy. However, it is also the time when the very large trout or even sea trout can be tempted to the surface from deeper lies to be taken on a traditional upstream dry fly.

Upstream Dry Fly have many river Test beats within their portfolio from wild trout on the upper reaches and tributaries, to sight fishing chalk stream salmon and sea trout into the tidal water at the bottom.

With Winchester at its heart, this chalk stream is the Test's smaller but very beautiful sister. She flows through some of the most beautiful countryside England has to offer. The Itchen stretches for 28 miles (45km) and includes its three tributaries that unite from three separate points of the compass - the Cheriton Stream, the Candover Stream and the River Alre (or Arle). The Itchen's total catchment is about 400 square kilometres.

Her source is at New Cheriton, she flows near Alresford, on to Itchen Abbas and Kings Worthy. The Romans dug a route around the ancient city walls of Winchester, on through Twyford, Eastleigh and out into Southampton Water via Swaythling. Her route is also 'braided' with many feeder and carrier streams, weirs and sluices. At her estuary she flows through the ancient city of Southampton and the original docks, home to ocean liners from the Titanic to the Queen Mary II.

As with the Test, the Itchen is regarded as one of the finest chalk streams in the world. Her pristine waters are still used today to grow watercress. As with the Test, she is home to many rare and beautiful animals such as the otter, the tiny brook lamprey and the southern damsel fly. The Itchen has equally diverse insect life and her impressive mayfly hatches tend to start slightly earlier that the Test. Mayfly can sometimes be seen as early as late April on the lower reaches, although the fish do not tend to rise to them until there are significant numbers over the water.

This river has also seen its share of famous fly fishing pioneers. Skues spent many hours on the well known Abbots Barton beat perfecting his nymph fishing - fishers still use his books as a reference today. Isaac Walton was perhaps England's most famous fisherman. He wrote one of the most published English books of all time – “The Complete Angler”, and is buried at Winchester Cathedral where a stained glass window pays tribute to the most famous 'brother of the angle'.

Upstream Dry Fly have access to some wonderful and very private wild trout beats on the upper Itchen in conjunction with a small holiday cottage. Available in bookings of 2 or 3 nights with the fishing.

The westerly cousin of the aforementioned rivers is also longer and has a greater watershed. It is one of the country's most varied rivers. Salisbury is almost a halfway marker and above this historic City she is home to some of our finest wild brown trout and grayling fishing, consisting of gin clear water and again some beautiful and challenging side streams and carriers.

Below the City of Salisbury, the Avon changes considerably; her four tributary chalk streams being a big factor here. They are the Wylye, the Nadder, the Bourne and the Ebble. The piscatorial quarry changes somewhat as well, coarse fish and salmon are in greater numbers downstream of the City, and the trout that do exist here seem not to rise so freely to the fly.

The Upper Avon starts with two streams, one flowing southwest from Milton Lilbourne, Pewsey and the other southeast from Bishops Canning. These meet just near Upavon, close to the A342. From here this most majestic river winds her way south reaching Netheravon. She passes near to Stone Henge and into the ancient city of Salisbury. Below Salisbury the Nadder, Wylyle and the Bourne converge. Here she changes appearance and with the increased flow becomes wider and deeper, hence the coarse and salmon fishing takes over here. Still flowing due south she passes Downton, Fordingbridge, Ringwood and through the famous Royalty fishery, along the grounds of Christchurch Priory to flow out into her estuary in Christchurch Bay.

Her upper reaches are of particular interest to the dry fly fisherman. The upper Avon in particular enjoys good hatches of upwing flies, olives and iron blues in early season, alongside falls of terrestrials such as hawthorn flies which hatch out of the trees to be haphazardly blown onto the water. Trout love Hawthorns and the fishing can often equal that of mayfly time. The upper Avon mayfly occur generally in Mid May, but can last right through to July! Sedges will work well June onwards, normally in the evening, as will various olives, which one will hopefully expect to see for the remainder of the season. Many of the beats here provide testing fishing for brown trout and some super grayling to over 3lbs!

It was on these famous upper waters that Frank Sawyer developed his famous style of nymph fishing specifically for grayling. He was the first to tie up artificials with fine copper wire, perfect for light subsurface fishing - this breakthrough gave way to the Grey Goose, the Sawyer's Pheasant Tail nymph and his Killer Bug, three of our most famous patterns. Oliver Kite was another famous fishing name who spent a lot of time on these waters. A pupil of Sawyer's, Kite wrote 'Nymph Fishing in Practice', a book famous for its study of upstream nymph fishing - this is the technique still used today on the English chalk streams.