The Way Of The Dragon

The Chinese Dragon is a very special fly and one that has caught me many fish. When fishing the Chinese Dragon, I always try to make the fly drift freely towards the fish before lifting it and making it swim away- just like you would with a nymph or using the induced take technique. 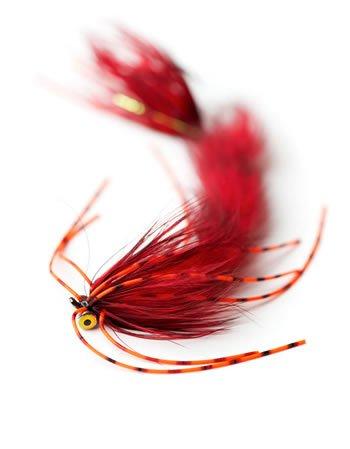 Inspired by the string leaches used in the Pacific Northwest for Steelhead fishing, the originals were made of black zonker-strips attached to a piece of backing. The hook was then tied to the backing, enabling it to move freely. This created a fly with great mobility. The problem however is that the free hanging hook has a tendency to tangle.

One of my friends, Dylan Tomine solved this by stitching the backing into the zonker-strip. I’ve taken this creation one step further by tying it in colours that are suitable for our rivers and our fish here in Sweden, especially with Sea Trout in mind. And of course, no surprise I’ve added rubber legs to make it even more lethal.

This special construction makes the fly swim and move at all times 360°, even when you drift it. It really jigs, wiggles and pumps which make it real Sea Trout candy!

Try it for Sea Trout in the river or for Salmon, Rainbow Trout and Brown Trout on the coast. It’s even proved itself as a great Pike treat.

I obviously tie the Chinese Dragons in different colours, sizes and with different weighted eyes but this red variant gave the fly its name. 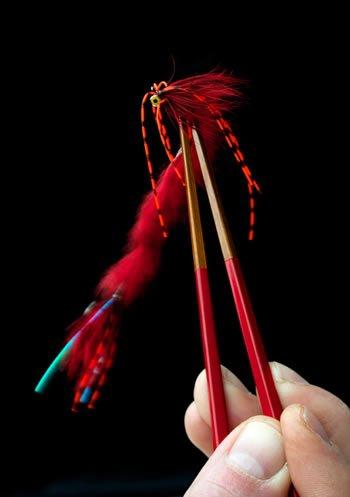 Put a hook in the vice and wrap the thread to secure it. Take the zonker strip and measure it in on the hook. Start with the two ends of the braid. Those ends are supposed to go through the eye of the hook and then back again to secure the strip well. Use super glue to secure the braid. Now tie in the strip itself and make sure to leave room for a front hackle and the dumbbell eyes. Attach two rubber legs on each side of the fly. The legs should be attached so one third points forward and two thirds backwards.

Tie the dumbbell eyes on the hook and secure with super glue.

Wrap the front hackle in place behind the eyes with 5-6 wraps.

Finish the fly by tying in two rubber leg antennas and secure with super glue.

Take the fly out of the vice when dry and nip the hook of so only the shaft is left.

Now you take the back part you tied earlier and attach it to the fly. Take the loop of braided line and push it through the eye of the back part and you have a loop to eye connection.

Mattias Drugge - Professional Fly Fishing Instructor and Product Developer
Based in Sweden, Mattias Drugge has been a professional casting instructor for over 15 years. Specialising in the Modern Scandinavian fly casting as well as Skagit disciplines, Mattias has introduced thousands of anglers to single and double hand techniques. His excellent pedagogic skills and in-depth knowledge of the physics and mechanics of fly-casting have made his casting and fishing schools extremely popular.